Yes, Naturopathic Doctors do Acupuncture too!

Acupuncture is a useful tool used by Naturopathic Doctors for many different health problems and is becoming more prevalent in conventional medicine too. This is due, in part, to western doctors (including Dr. Chan Gunn, MD Vancouver founder and president of the Institute for the Study and Treatment of Pain) who advanced the understanding of the physiology of 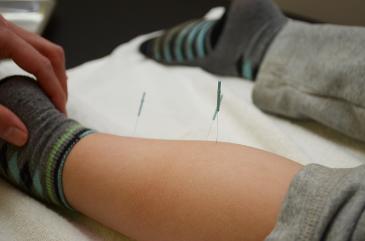 Pictured here is one of our doctors performing acupuncture on a young boy.
acupuncture. It is now known that acupuncture can be used to stimulate or relax muscles as well as the nervous system. There is evidence to support that opioid peptides (your body’s natural painkillers) are released during acupuncture as well as an alteration in the secretion of neurotransmitters and neurohormones that involve the regulation of blood flow.

A History of Acupuncture and Traditional Chinese Medicine (TCM)

TCM is a unique medical system that has over a 2000 year history. It was used to diagnose, treat and prevent illness by utilizing over 350 acupuncture points (some believe that acupuncture actually originated in India), acupressure, Asian herbs, Asian massage techniques, specific foods and exercises. TCM theory evolved to incorporate a series of opposing principles including yin and yang, hot and cold, deficiency and excess, as well as energy flow, or Qi (pronounced “chee”) and was heavily influenced by the dominant religions of the far East (Buddhism and Taoism). TCM theory historically taught that when any of these principles are out of balance, the body cannot adapt to stress, making in more likely to develop illness and pain.  TCM practitioners try to find and relieve the imbalance to restore health.
For insurance purposes, we always bill Acupuncture under Naturopathic Doctor appointments.

Back to Naturopathic Services